Intro/background: This is a post written as part of the Science Online London blogging workshop, which I am using to show how to embed media into a WordPress blog post and how to collaborate. The theme of the conference workshops is “spinal muscular atrophy”, and this post briefly explains how induced pluripotent stem cells can help find a treatment for this disease.

Spinal Muscular Atrophy (SMA) is a disorder causing muscular degeneration, and is the leading genetic cause of death in infants and toddlers. The development of drug treatments suffers the same limitations as the development of drugs for other diseases. One of these problems is a discrepancy between the cell types used in drug selection screens vs. the actual cells in the patient’s body.

Fortunately, this is a problem that can now be overcome in part by the use of induced pluripotent stem cells (iPS cells). iPS cells are stem cells that are created from non-stem cells, for example skin cells, and are artificially reverted back to the stem cell state. These iPS cells can then be reprogrammed to form any other cell, but will characteristically still have the same genetic information as the source cell. 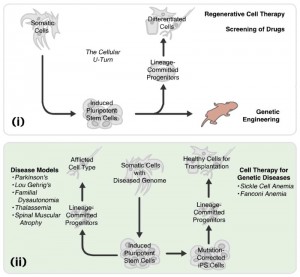 This image (click for bigger version) shows how cells can be reprogrammed to cells that are relevant to a particular disease phenotype, which can then be used for drug screening, for example. The schematic comes from a paper by Vimal Selvaraj et al. (see citations below), and the specific technique was described for SMA by Ebert et al. in a 2009 paper in Nature.

iPS cells generated from SMA patients’ fibroblasts maintain the genotype of the disease and can form motor neurons that show disease phenotype. These cells can then be used to screen drug compounds and study the effect they have on the disease at a cellular level, using human cells. Lee Rubin’s lab at Harvard Stem Cell Institute is doing such screens, and below is a video of a recent interview with him where you can find out a bit more about his work. His group recently published a paper in which they used a drug screen on SMA-patient-derived cells to show that glycogen synthase kinase 3 (GSK-3) inhibitors can elevate protein survival of motor neuron (SMN) in these cells. Since the pathology of SMA is caused by decreased levels of SMN, this suggests that GSK-3 inhibitors might provide a viable therapy. However, screens like this are only the first step in drug discovery, and there is a lot of work still to be done.